The Backstory and the Future

I’m Alistair, founder of Saberr (and current number 4 seed in the office ping pong league). A few years ago, before we had a ping pong table or even an office, Saberr was just an idea. This is the the story of where the idea came from and how we developed it in the first 12 months.

In 2012 I was studying under Noam Wasserman at Harvard Business School. He’d just written a book called the Founder’s Dilemmas (now a mainstay of entrepreneurial literature). In it he discusses a study of a large number Venture Capital firms in the United States and their portfolio investments. The study found that 83% of venture backed startups failed, and while this may not be news to many, it is nevertheless a large proportion. More interesting though was the finding that 65% of these failures could be attributed to team dynamics. Meaning that interpersonal issues between the founders or between the founders and early employees was the primary cause of failure for the majority of companies.

There are many reasons why a company might fail but it most often comes down to running out of cash. Wassermann’s research explained that the reason companies ran out of cash is because of inefficiencies in the decision making process as a result of poor team dynamics. Everything else; product, distribution, funding etc is simply a derivative of team dynamics. So this was the first question we tried to answer. “Can team dynamics predict startup success or failure?”

I was already reasonably familiar with the traditional team dynamic measures of personality profiling and psychometric testing. Tools like Myers Briggs, Belbin, Thomas International, or Hogan are all widely used and very interesting, on an individual level, but they’re not predictive at the team or organisational level. In other words, one cannot use a personality test to predict success in business. The other problem was that the academic community is still divided on the validity of these tests including the definitions of dimensions and resulting frameworks. So we simplified our first question to, “Can we predict a good relationship between people?”

Together with Sam Mead, Saberr’s co-founder, we set out to find a digital data source that could help us predict relationship quality. So we turned to online dating. Which is a great place to start because online dating is simply a digital record of two people’s search to find a good relationship, albeit a romantic one. We were looking for patterns in successful matches. And we defined a successful match as two people who meet online and then close their accounts, because in the highly transactional world of online dating you go on lots of dates but you leave your profile open just in case you meet someone better. So when you close your account what you’re saying is — this person is significantly better than everyone else I have met or dated. It turned out there were very clear patterns in the way successful matches behaved online and answered certain questions. If you’re interested in this you should start with the writing of Christian Rudder, the chief data scientist behind OKCupid. We then combined these findings with some of the more consistent findings from academic behaviour research. Findings like — for generic teams, by and large, and regardless of how you measure it, diversity is beneficial (I should caveat this and say there are some situations where this does not hold true). And that was that, online dating patterns combined with academic behaviour analysis resulted in Saberr’s first attempt to predict economic outcomes by measuring relationships.

Our first test of the algorithm was at the University of Bristol. They were hosting a business plan competition as part of their Spark course. The competition was a week long with roughly 8 teams of about 8 people in each team. We wanted to see if we could predict which team would win without any knowledge of their skills, their experience, their demographic nor the idea they were working on. In fact we never even met the people, we simply asked each person some questions about themselves via an online survey. Then the organisers told us who was in which team and we mapped out the expected relationship dynamics in each team and ranked them from best relationships to worst relationships. We were hoping to be roughly right, roughly the teams with better relationship quality would rank higher than those with lower relationship quality. But instead we got the precise ranking of all 8 teams spot on. The probability of getting this correct is 1 in 40320.

My first reaction was probably quite similar to yours. Lies/something is wrong/probably just luck. So we repeated the experiment at various entrepreneurial competitions. The 20 or so competitions spanned anything from 1 day to 8 months in duration. The longest running and perhaps most robust test was our attempt to correctly rank the 10 finalists in the UK Microsoft Imagine Cup event in 2013, read their reaction here. We weren’t always 100% perfect but we had phenomenal accuracy at predicting not just the winners but the ranking of teams without knowing any of the usual indicators of success and certainly none of the information that a VC firm would have when choosing who to invest in.

Seedcamp and The Real World

We did a similar test with Seedcamp, Europe’s premier seed stage investment firm. In September 2013 Seedcamp drew up a shortlist of 21 companies as consideration for investment from some 800 applicants. We told Seedcamp that not only could we predict who they would invest in but we could also predict how they would fare. We ranked the companies from most likely to receive investment to least likely. Seedcamp invested in 11 companies, we got 8 of those correct. The company that we pegged at 11th in our ranking had some patterns that we felt made it a risky investment. Sure enough, one week after Seedcamp made their investment in the company, it folded for the reasons we suggested. One of the partners at Seedcamp commented, “In Venture Capital we back teams because that is all you can back in the early days. So we obsess over team composition. We have been amazed to see Saberr’s predictions of our current cohort’s team makeup. Saberr is set to finally disrupt recruitment forever and make it about team building rather than simply about job placement or individual skills.” Seedcamp subsequently became Saberr’s first investor.

Out of sheer curiosity, and a desperate need for a skilled developer, Sam and I tested all the developers in all of the shortlisted companies against ourselves. It turned out that the best match as predicted by our algorithm was Nik, the lead developer from the company that folded. Nik is now our CTO and has been superb ever since he joined.

This calls into question a lot about how we currently build organisations, how we choose who to hire and how we organise people into teams. What it doesn’t say is that skills or experience are unimportant; skills are important. If you’re going to hire a doctor, they need to know what they’re doing — there’s limited scope for learning on the job! But skills should just be a constraint, can they or can they not do what is required? Once that threshold has been achieved, better skills does not equal better performance. I would argue that the ability for me to learn new skills and excel at my role is more impacted by my relationships with my colleagues than it is by the skills I had when I started work. The applications go beyond the workplace — think about the application in education. Designing classes where teachers are paired with the students they’re more likely to have a good relationship with, or designing group projects where students are more likely to learn better from each other in a more natural way. Think about the application in hospitals, helping design ward team shift patterns so doctors and nurses end up working with the people least likely to cause each other stress and most likely to help each other deliver better patient care.

We are still just scratching the surface with our work and our algorithms are far from perfect. We still get things wrong but we are also making huge improvements to the outcomes of the companies who use our software.

At Saberr we share a belief that humankind’s next great accomplishments will come from better understanding our brains, our behaviours and our interactions. The rate at which we are advancing as a species is almost exponential, in fact our growth shares many similarities to that of Moore’s Law. What if we could optimise the system that is driving that curve? What if we could design organisations where people have better relationships, higher performance and less petty internal politics? What if we could help everyone achieve their goals faster and more effectively? Well then we might see a step change in the gradient of that line. We might just live to see the future we all dream about and avoid the future we all fear.

That is why Saberr’s mission is to help people work well together.

After working with many global organisations on assessing the culture fit of candidates during the hiring process, they consistently came back to us with the same problem. "Matching candidates is great, but our existing teams aren't a good fit for each other in the first place. Can you help us make our existing teams better first?"

Which is why we designed CoachBot to help new managers, specifically entry level and mid level managers learn how to be great leaders and get the most out of their team. Think of it as the best of leadership development and performance management, combined. 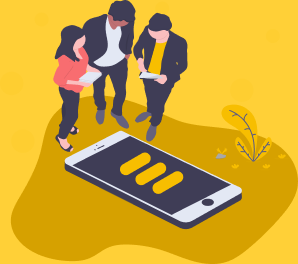